Anecdotal evidence indicates that it may be possible to predict developments in real world conflicts from certain indicators in cybercrime traffic.

Is it possible to glean useful information about international developments or even predict real world attacks from the activity that we record in the logs of Internet-facing systems?

Note: A trackerless (other than my webserver log) version of the article is now available on my web site.

Looking at data I collect for other, quite pragmatic, reasons I see a clear correlation between the run-up to the Russian invasion of Ukraine earlier this month and the password guessing activity targeting non-classified systems in my care.

I'll be backing up that assertion with data later, but first, a bit of background.

As returning readers already know, I have been running Internet facing systems for a select group of friends and family for decades. In the late noughties I noticed a pattern of slow, distributed password guessing that I dubbed The Hail Mary Cloud, summed up in the summary article linked here and links therein. The data I collect from those failed logins make it into a set of blocklists, along with data from a few other sources. And yes, this is also one source of new spamtraps, as noted in the blocklists article.

A few years after the original Hail Mary Cloud events, in January 2016, I started seeing Hail Mary-like activity again, and started collecting data (available in the raw here), but failing to see any new patterns worth writing about, never started a new article based on the data. Until now, that is.

The table here has the totals for number of attempts per month since then (the table as a .csv file is available here):

It is worth noting that these attempts in almost all cases lead to getting the host blocked and published in the blocklist, some immediately if they come in very quickly, others after a short time, such as if they try logging on as root, admin or a few other obvious ones.
Anyway, the data shows that the typical number of attempts per month is at least in five digit numbers, with seasonal variations. But at the end of 2021 we saw a marked decrease in activity from October 2021 onwards, only to see a sharp rise again in February of 2022.
The development becomes even more striking if we look at the per day data for February, complete up to about mid-day CET on the 27th:

The developments stand out even clearer when presented as a graph: 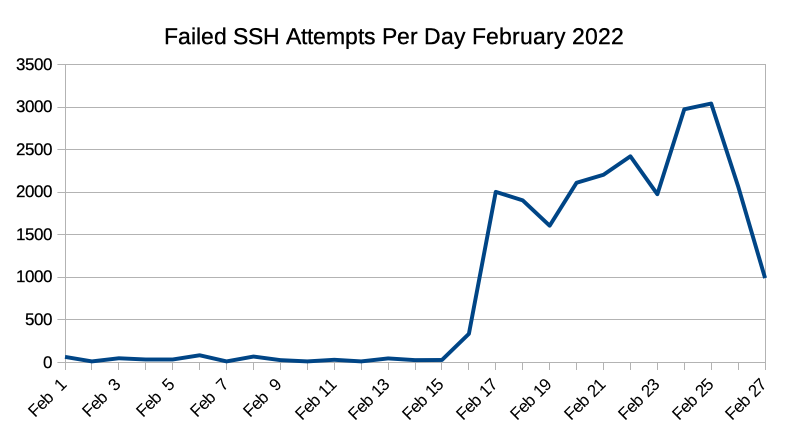 Again, it is worth noting that the data is complete only up to mid-day on February 27th.
But we see clearly that the number of attempts (effectively attempts by new hosts, quickly blocked) increased slightly on the 15th, only to essentially explode into levels equal to or slightly higher than the previous normal roughly a week before the Russian invasion of Ukraine started in the early hours of Febuary 24.
On Febuary 15th, activity that was obviously preparations for an attack on Ukraine had been underway for weeks, and it was obvious to me that the activity was part of a campaign to acquire new nodes for botnets to be used for any kind of cybercrime or disinformation bot that can be run from things that run a SSH service, typically Unix-ish systems.
Even before the current Ukraine episode I had a vague feeling that similar correlations would be visible in the data collected around earlier international events, but by Febuary 17th I was fairly confident that the attack was imminent.

Then on the day of the attack, I tweeted:

My regular readers will probably not be surprised to hear that #hailmary-ish #ssh #password guessing is way up (from historically low levels) during the last few days. I ponder doing a writeup. Should I go ahead and do that?

I will of course be monitoring the situation for developments and may follow up with further analysis.

If you do not want to wait for those write-ups, you are welcome to go ahead and analyse the data (as long as any reuse or resulting analysis credits the source) -- the archive is here while the data for the month so far can be found here (note: that link always points to freshest collection for the current month).

If you too collect logs on similar activity and you are able to share data or analysis, I would like to hear from you.
Update 2022-03-01: The month ended, and the final data for February 2022 are in. The counts for February 27 and 28 were 1509 and 1138 respectively, continuing the decline in new hosts attempting that we had been seeing over the previous few days. The total number of failed attempts for that month ended up at 25873.
The final month graph looks like this: 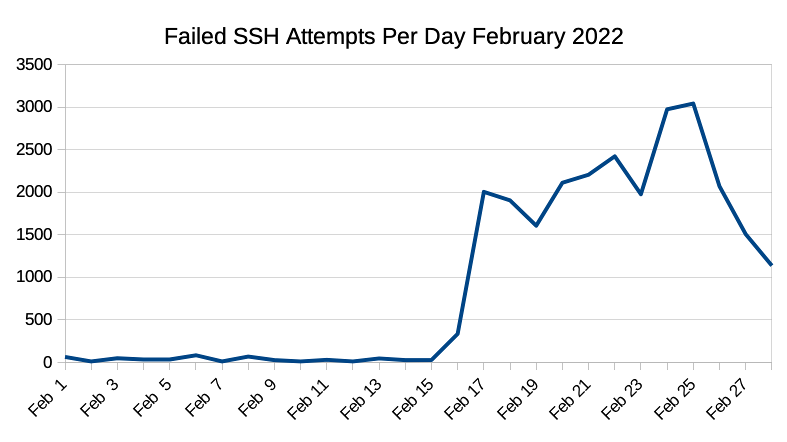 The full data for February can be found in this file as well as in the current year's .zip archive in the archive directory.
Update 2022-03-05 11:50 CET: We may be seeing another uptick in expectation of a propaganda-needing event.

The numbers for failed ssh logon attempts in March so far are:

Notice that the the number of attempts before noon today already exceeds the total for the previous day. We may be seeing the preparation for another offensive or other event in need of propaganda or other cybercrime support. Stay tuned for updates.
Update 2022-03-09: The month to date daily numbers for failed attempts are now available, updated at quasi-random intervals a few times a day as ssh_attempts_month_to_date.txt.
Update 2022-04-02: As can be seen from the month to date numbers (now covering April 2022) we are now seeing another busy day on the password guessing front with almost 2000 attempts already by only a little past noon CEST. For reference, the numbers for March can be found along with previous data in the archive directory.
Posted by Peter N. M. Hansteen at 15:49